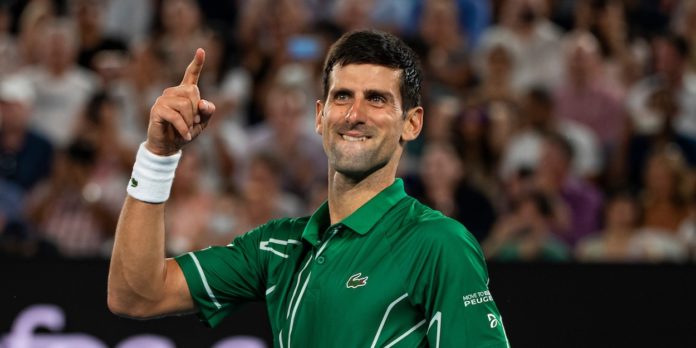 After a lot of thought and consternation, World No 1 Novak Djokovic decided to travel to America for the US Open, which will be held from August 31 behind closed doors.

The Serb said that, “One of the reasons why I keep on playing professional tennis on this level is because I want to reach more heights in the tennis world.”

Djokovic is not only hoping to close the gap on his rivals for the number of major titles—he is at 17, while Roger Federer leads the pack at 20 and Rafael Nadal has 19 – but is also eyeing Federer’s record of number of weeks at No 1. The Swiss has spent a total of 310 weeks ranked No 1 in the world, while Djokovic is at 282 currently.

The Serb had his reservations about coming to the Open and it’s clamping health and safety protocols but arrived in New York this week, and will get back to competition at the Western & Southern Open, which begins on August 22.

He is staying in private rented housing during the two tournaments and has negotiated with the USTA to let a maximum of three team members, including coach and former Wimbledon champion Goran Ivanisevic, accompany him. The USTA had earlier decided that players will be allowed to travel with only one additional person.

Not only is Djokovic paying for the rent for accommodation, but also for the round-the-clock security approved and monitored by the USTA. In an extensive interview with The New York Times, the World No 1 opens up on the upcoming US Open, the much-maligned Adria Tour and his take on vaccination.

On US Open, and being the only member of the Big 3 (along with Roger Federer and Rafael Nadal) participating in the hard-court Slam this year

It is strange, because these two guys are the legends of our sport and with or without crowds, they are going to be missed a lot.

ALSO READ: US Open will be ‘worth less,’ feels Dominic Thiem

First of all, I have to think about myself and my health and my fitness and whether my team is OK to be here. Once that was checked, then I of course also felt responsible as a top player to be here. It’s important for our sport to keep going.

On his rented accommodation near New York City

I’ve seen the hotel where the majority of players are staying. I don’t want to sound arrogant or anything like that, and I know the USTA did their best in order to provide accommodation and organize everything and organize these bubbles so the players can actually compete and come here, but it’s tough for most of the players, not being able to open their window and being in a hotel in a small room.

It is super important I made this investment because it’s going to make me feel better. I’m going to recover better and can actually have some outdoor time when I’m not on site.

On Adria Tour and the backlash

We tried to do something with the right intentions. Yes, there were some steps that could have been done differently, of course, but am I going to be then forever blamed for doing a mistake?

I mean, OK, if this is the way, fine, I’ll accept it, because that’s the only thing I can do. Whether it’s fair or not, you tell me, but I know that the intentions were right and correct, and if I had the chance to do the Adria Tour again, I would do it again.

I agree things could have been done differently with the nightclub. The sponsors organized. They invited players. We felt comfortable. We had a successful event. Everybody was really happy and joyful.

We’ve done everything they (respective national governments) asked us to do, and we followed the rules from the Day 1.

I do feel sorry for people that were infected. Do I feel guilty for anybody that was infected from that point onward in Serbia, Croatia and the region? Of course not. It’s like a witch-hunt, to be honest. How can you blame one individual for everything?

I see that the international media has taken that out of context a little bit, saying that I am completely against vaccines of any kind. My issue here with vaccines is if someone is forcing me to put something in my body. That I don’t want. For me that’s unacceptable.

ALSO READ: Tennis became the only thing I could do, says Agassi

I’m sure that there are vaccines that have little side effects that have helped people and helped stop the spread of some infections around the world.

On potential issues with a Coronavirus vaccine

How are we expecting that to solve our problem when this coronavirus is mutating regularly from what I understand.