This year will go down in the history books as one of the most bizarre seasons. Here is a list of players who retired from tennis in 2020:

The five-time Grand Slam champion bid farewell to the game in February this year at the age of 32.

A major crossroads in Maria Sharapova’s career came in March 2016 when she confessed to the world that she had tested positive for the banned drug Meldonium. Though Sharapova served her time and returned to tennis, she never did hit the highs in the game after that.

Lingering shoulder problems meant she wasn’t quite the force on the women’s tour as she was before the drug ban. Since her comeback, the farthest the Russian went in Grand Slams was a quarterfinal finish at the 2018 French Open.

Sharapova lost in the first round, to Donna Vekic, at this year’s Australian Open, in what happened to be her last competitive match.

“I’m new to this, so please forgive me. Tennis—I’m saying goodbye,” Sharapova tweeted in February 2020. “In giving my life to tennis, tennis gave me a life. I’ll miss it every day. I’ll miss the training and my daily routine.”

She is now a successful businesswoman, having expanded her empire beyond the candy company Sugarpova.

Wozniacki, the first Scandinavian woman to top the women’s rankings, was No 1 in the world for a total of 71 weeks.

The crowning glory of her career was winning the 2018 Australian Open with an epic 7-6, 3-6, 6-4 win over Simona Halep in the final. It was the third time she had reached a Grand Slam final.

Wozniacki brought her career to an end at this year’s Australian Open, going out to Ons Jabeur in the third round.

The Dane was diagnosed with rheumatoid arthritis late in 2018, and it could be one of the reasons why she decided to step away from tennis.

The former Wimbledon semifinalist bid farewell to tennis with an emotional message in October.

Goerges appeared in her 48th straight Grand Slam at the French Open recently. It appears that her second-round loss to fellow German Laura Seigemund at Roland Garros was will be her last professional match.

In October, Goerges wrote on her website, ‘Dear Tennis, I am writing to you, because I am ready to say “Goodbye”. When I started playing tennis at the age of 5, I would never have thought that we would go such a long way together.”

Making her debut on the ITF circuit in 2005, the German went on to win 12 WTA titles (seven singles, five doubles) in her 15-year career.

They hold the Open record for 119 titles as a team including all four Grand Slams, all nine ATP Masters 1000s, the Nitto ATP Finals and the Olympic men’s doubles gold medal.

The 10-time year-end No. 1s, known for their signature chest bump celebration, also finished their careers with the all-time team records for Grand Slam titles (16 from 30 finals) and ATP Masters 1000 crowns (39 from 59 finals).

The Bryan Brothers’ last tournament was the Delray Beach Open in February, and they finished their careers with a 1,108-359 team record.

“We feel it’s the right time to walk away,” said Mike Bryan.

“We’ve given over 20 years to the tour, and we are now looking forward to the next chapter of our lives. With that said, we feel very blessed to have been able to play the game of doubles for so long. We are grateful to have had the opportunities in the beginning of the year to play and say our goodbyes to the fans.” 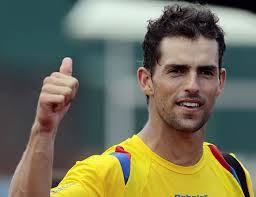 “I started at 15 and now, at almost 33, I’ve decided to say thank you and put a full stop at the end of this journey,” said Giraldo.

ALSO READ: ‘I get death threats every time I lose’

“I did the best I could, and I gave everything I had. I remember that curious, unique, explorative and rebellious boy who left his home at just 12 years of age, carrying only his racquets and his dreams, until he arrived here today. I don’t regret anything I did.”

Darcis earned the biggest win of his career on Centre Court at SW19, where he stunned two-time champion Rafael Nadal in straight sets. At No. 135 in the ATP Rankings, Darcis was the lowest-ranked player at the time to defeat Nadal at a Grand Slam event.

ALSO READ: ‘Djokovic’s game does not make anyone dream’

The Belgian was known for his creative game. He used his one-handed backhand to great effect, especially his slice.