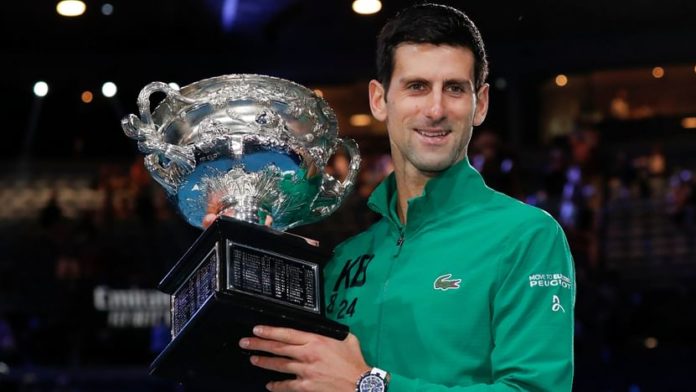 Novak Djokovic has moved a step closer to equalling both Roger Federer’s (20) and Rafael Nadal’s (19) grand slam titles records as the Serbian defeated Dominic Thiem in the final of the 2020 Australian Open.

I am blessed to hold this trophy once again

After winning the first set 6-4, Djokovic looked like he was firmly on the way to defeat in sets two, three and four before a late comeback in the 4th set saw him break the Austrian’s serve and the momentum of the match shifted drastically.

“I would like to start by saying congratulations to Dominic for an amazing tournament, it was a tough match but you were very close to winning it.

“I would like to thank my team, my family, my brother is here – thank you for coming all the way to Australia for some quality brother time and hopefully you enjoyed it.”

“There were some devastating things that started 2020, bushfires here in Australia, conflicts in parts of the world, one person that I considered close in my life and was a mentor to me, Kobe Bryant, passed away.

“I would like to say that this is a reminder to all of us we should stick together more than ever, be with our families, stay close to the people that love you, that care about you, there are more important things in life and it is important to be conscious and humble about things happening around you.

“This tournament sets a high standard for all the others, definitely my favorite in the world, and I am blessed to hold this trophy once again.”

Djokovic’s 17th slam title puts him just two majors behind Nadal and three behind Federer, so the question is – can he equal both players in 2020?

Will Smith to play Richard Williams in biopic

Will Smith to play Richard Williams in biopic