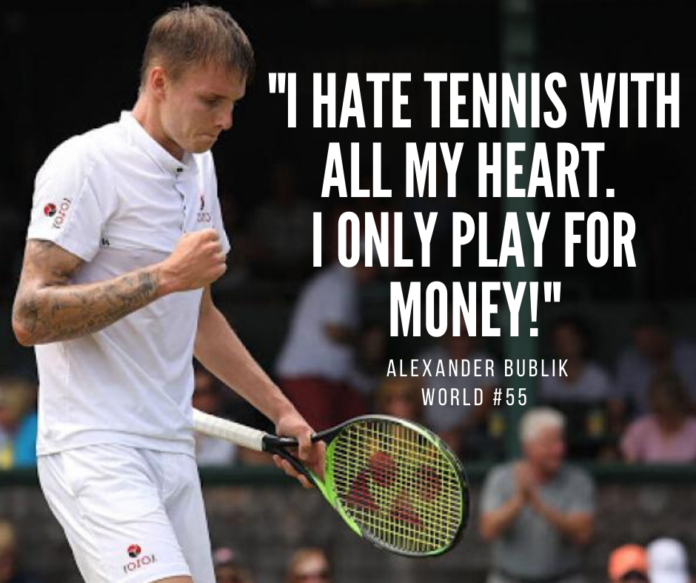 World number 55 Alexander Bublik has admitted that he “hates tennis” and only plays for the money.

In a truly shocking revelation, the Russian born player who now represents Kazakhstan said in an interview with French newspaper L’Équipe:

“I hate tennis with all my heart. To be honest, I don’t see something positive in being a tennis player. I only play for money. If there was no money, I would stop playing tennis instantly. I haven’t earned enough money, in any other case I would have already retired.

I only play for money. If there was no money, I would stop playing tennis instantly.

After winning his first-round match at The Open 13 ATP event in Marseille, France, Bublik added:

“I will probably die playing tennis. But it is difficult, being a professional, to play every day, always with new opponents, even if you have pain everywhere”.

“Even if you divorce, if you separate from your girlfriend, you have to play and if you lose everyone asks you why you lost. This is the part of tennis that I hate”

Given the fact that many aspiring tennis players give up due to finances and the meager prize money that is given on the lower level ATP and WTA events, Bublik’s statements are sure to annoy many of his fellow players.

What do you make of his admittance?