World No 1 Ashleigh Barty has revealed that she will be forced to withdraw from the upcoming WTA 500 events in Doha and Dubai because of an injury on her left leg.

The top seed was expected to highlight the line-up for the event in Doha starting on Monday, March 1. However, she’s now expected to return to the tour only towards the end of March, staring with the WTA 1000 Miami Open.

“Unfortunately I have withdrawn from the Qatar Total Open with a left leg injury,” she said in a statement published on Instagram by the Qatar Tennis Federation.

“I look forward to competing again in Miami in a few weeks’ time.” 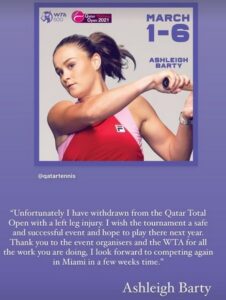 This comes after she crashed out in the first round of the Adelaide International following a 6-3, 6-4 defeat to Danielle Collins of the United States.

The 24-year-old had, who was among the favourites to lift the Australian Open title, surprisingly exited at the quarter-final stage after a three-set loss to Karolina Muchova.

This was despite winning her first competitive event after the outbreak of the pandemic, the Yarra Valley Classic, a week before the year’s first Slam.

During the fortnight in Melbourne however, the 2019 French Open champion did play with a heavily strapped left thigh in her second round match against compatriot Daria Gavrilova. She had paired up with American Jennifer Brady to play doubles at the Open, but withdrew before her second round match.

ALSO READ: Murray believes Thiem would not have won the US Open if…

However, despite the concern, she asserted that she was “fit as a fiddle.”

Without Barty in the line-up, the field in Doha will now be headed by World No 3 Simona Halep.

Why Dan Evans was annoyed with Novak Djokovic

Novak Djokovic: I can’t control what my father says

Why Dan Evans was annoyed with Novak Djokovic

Novak Djokovic: I can’t control what my father says

Stefanos Tsitsipas tells umpire, ‘Go back to the Futures’